The first thing I always say when an audio device is giving a low frequency hum: “Bad caps!”. The NAD L70 DVD-receiver was no exception in this. 🙂

After taking the lid of the enclosure, the cause of the hum was very obvious: 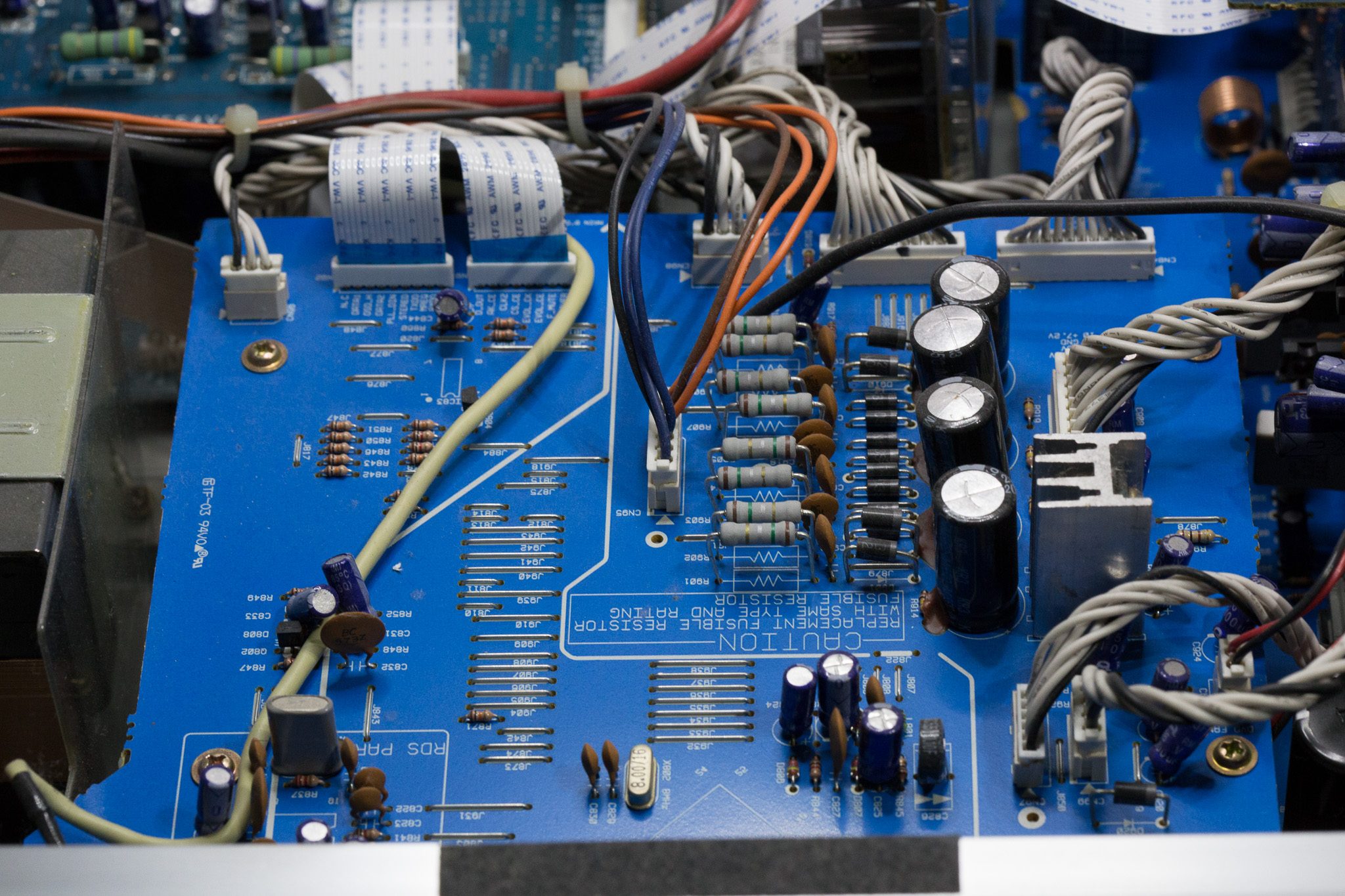 Lets take a closer look, now you can see they have expanded quite a bit. The brown fluid on the circuit board is not from the caps, its just glue: 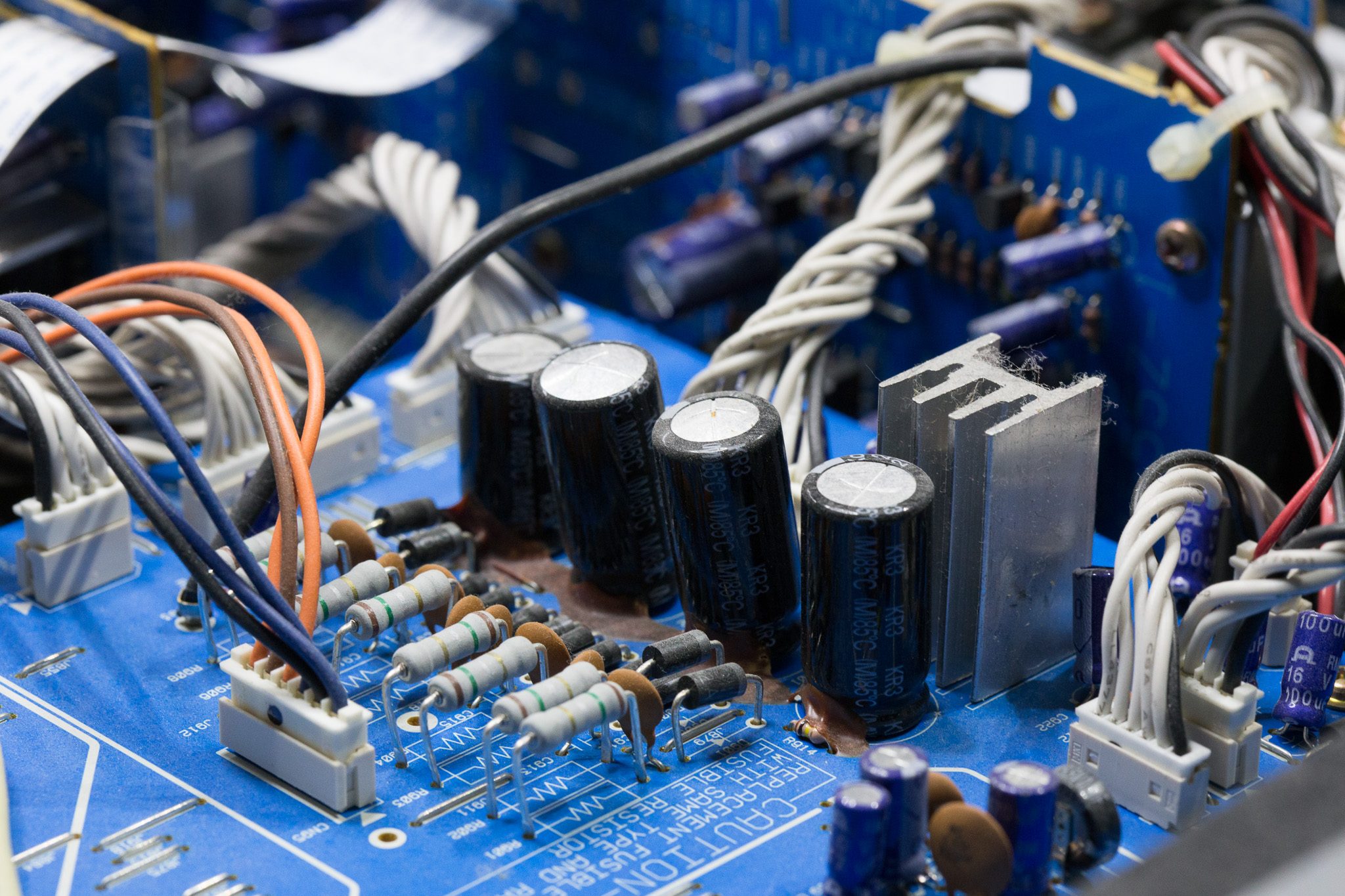 Just to be sure, I replaced them all with good caps: 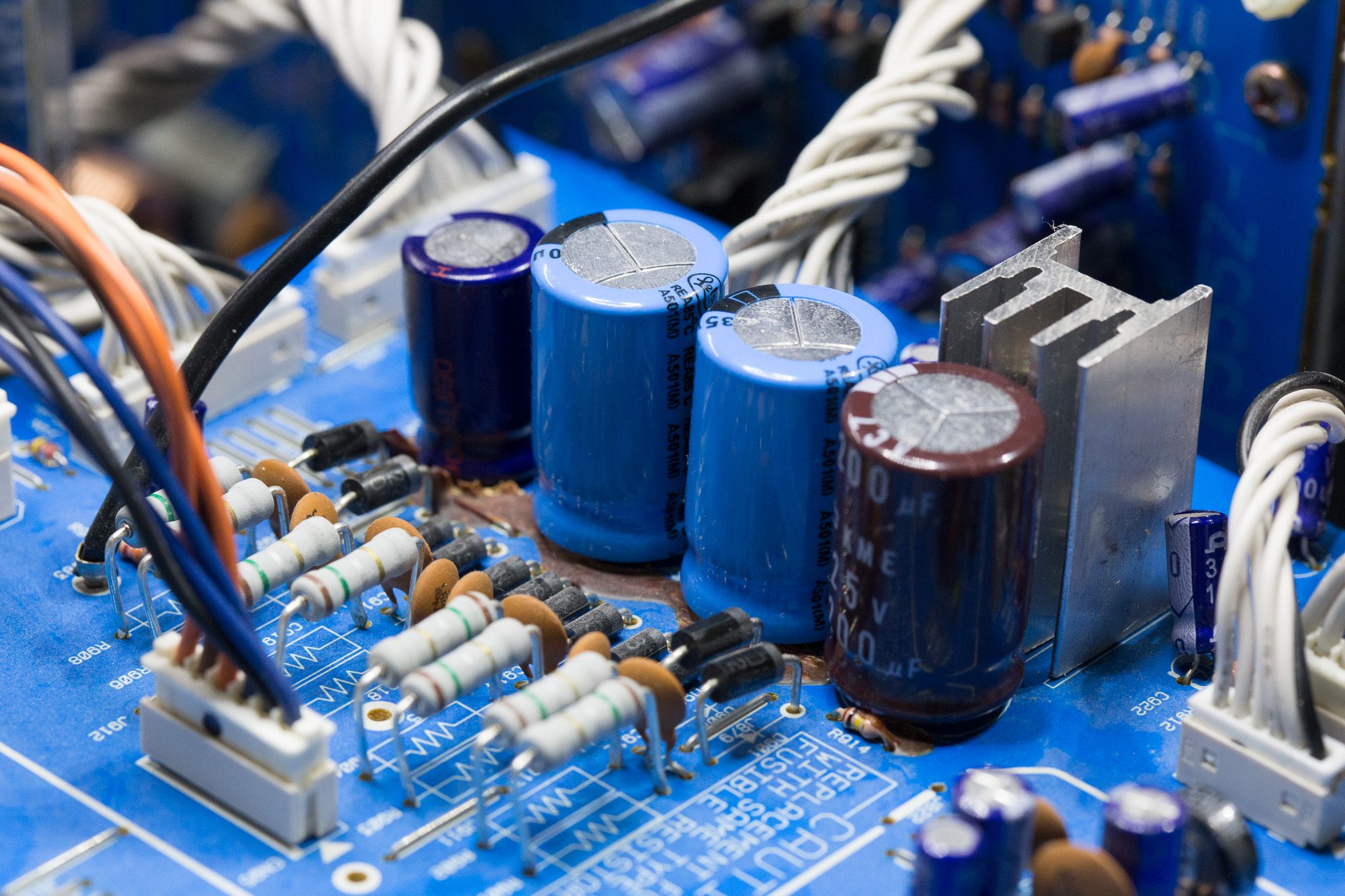 After testing the hum was gone, but unfortunately the CD/DVD player was not in a very good condition. What it needed was a new laser unit.
I ordered one from aliexpress and after quite a while (because of a mistake of the local postal office in The Netherlands who did not notify me of the package and returned it after three weeks) I finally got a new laser unit and the NAD L70 was as good as new again!

This time a Technics surround receiver on the work bench: 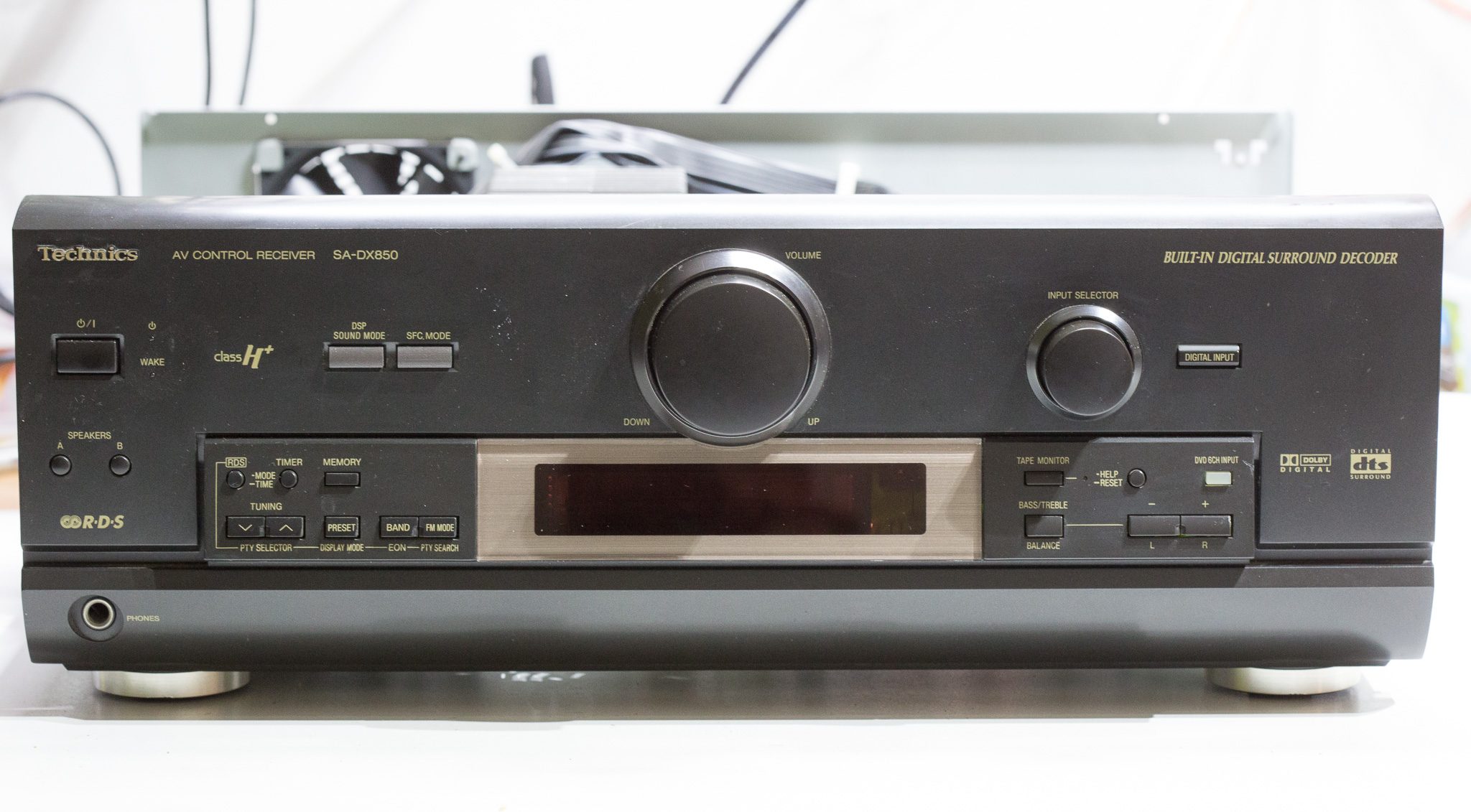 I’ve found a post on a German website about the SA-DX750 with similar error. On this post they were referring to a PCB connection problem. I took the service manual, schematics and took a quick look if this could be the case at this SA-DX850 as well.
In fact, it did. As I measured the resistance of the two wire points that should be connected, the resistance wasn’t near 0 ohms.

This is the PCB with the error: 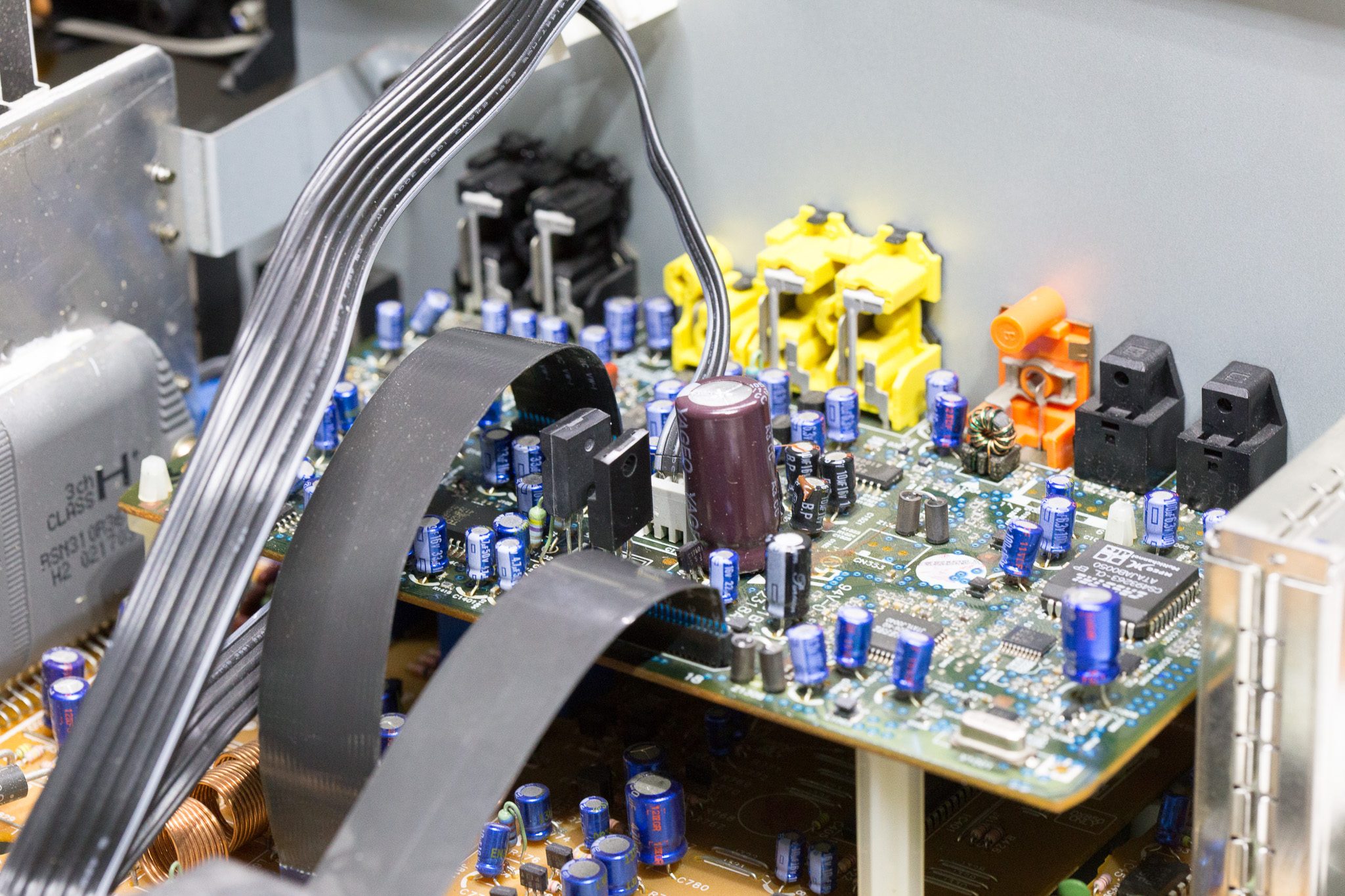 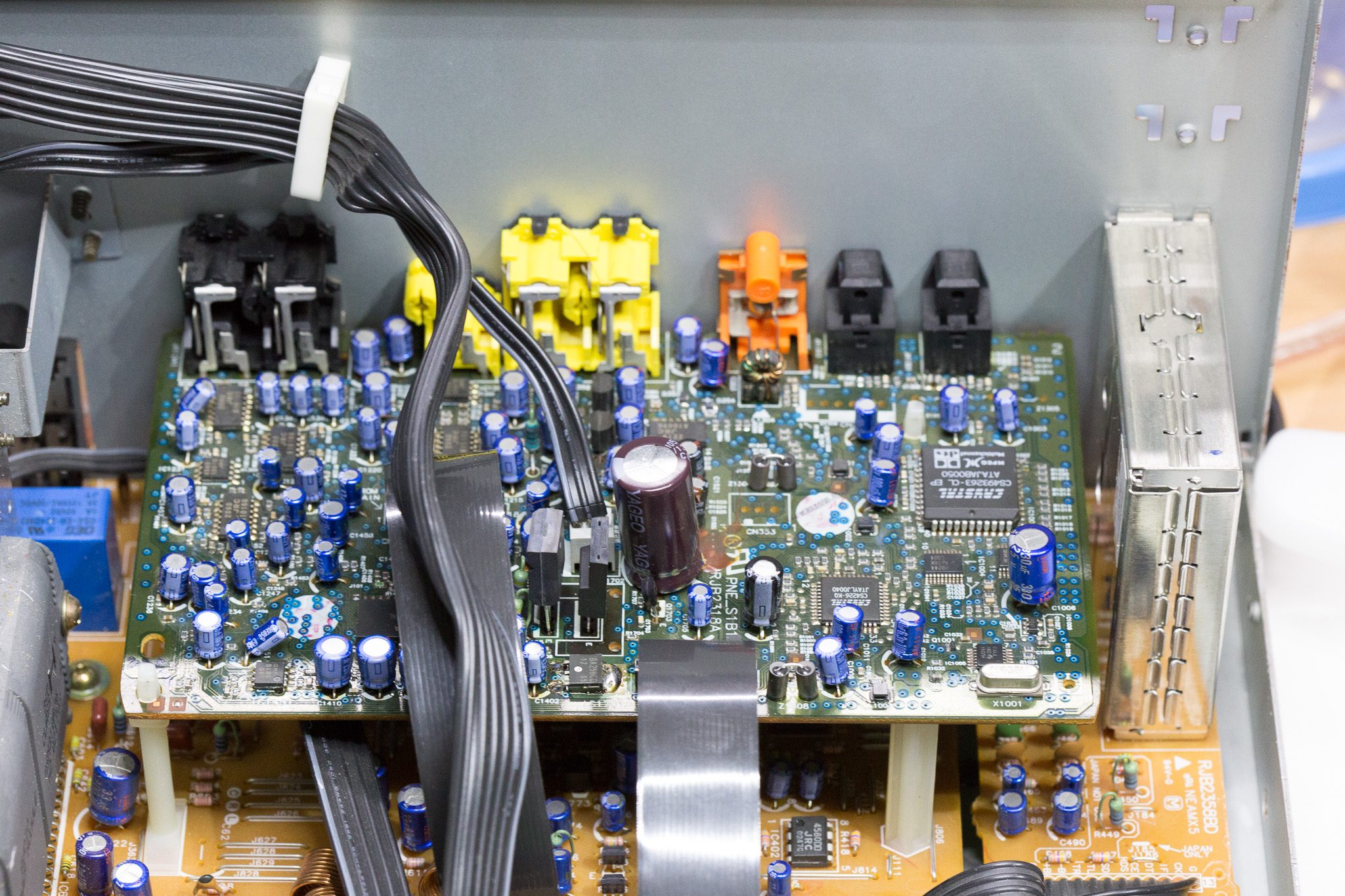 I took the PCB out of the receiver and soldered a small piece of wire between the points that should be connected to each other: 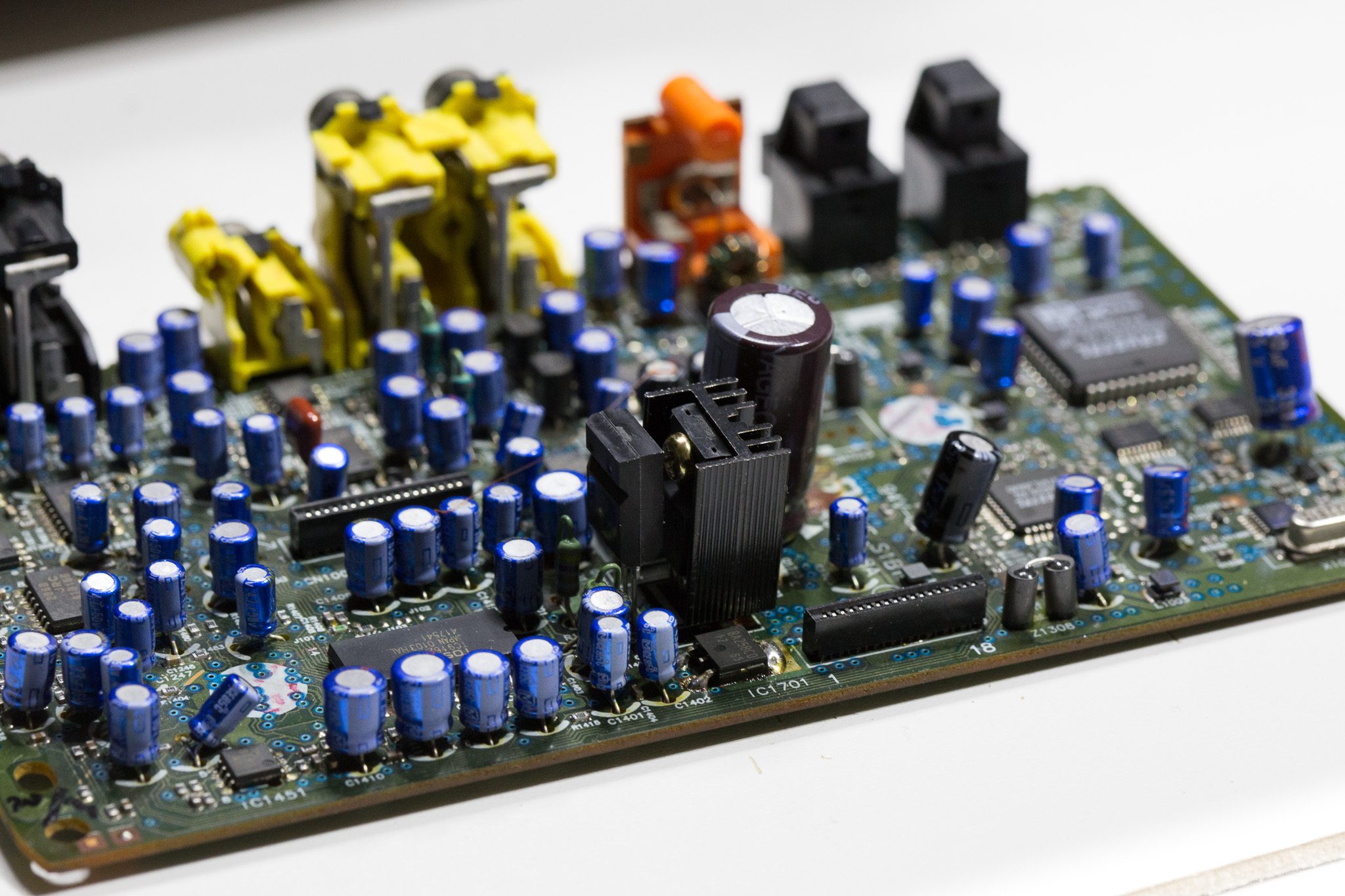 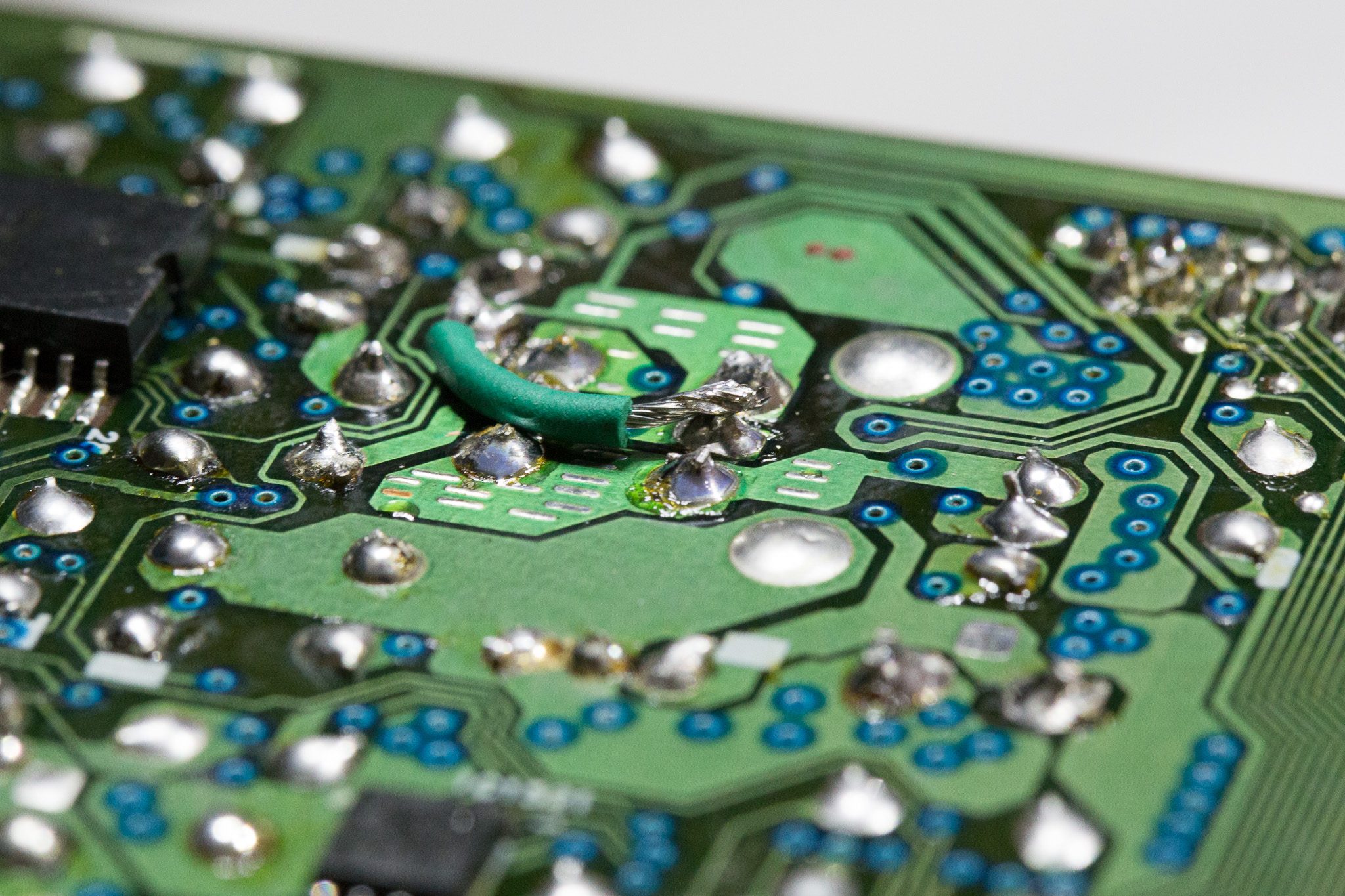 Reassembled the receiver again and YES, it is working again!

But that is not all. The volume knob is very jumpy and not reacting very smooth. It’s not a normal stereo volume potmeter, but a digital one. Such type of dial goes by the name of “Rotary switches”. They act like two switches that opens and closes one at the time.
The direction of rotation is detected by the phase of the pulses those switches give. One switch will act a little later than the other one. Over time the contacts in those rotary switches will become oxidised and will loose its conductivity.
Cleaning the contacts with a fibreglass pencil will fix it and no need to replace the complete rotary switch:

First remove the front panel and unscrew the PCB: 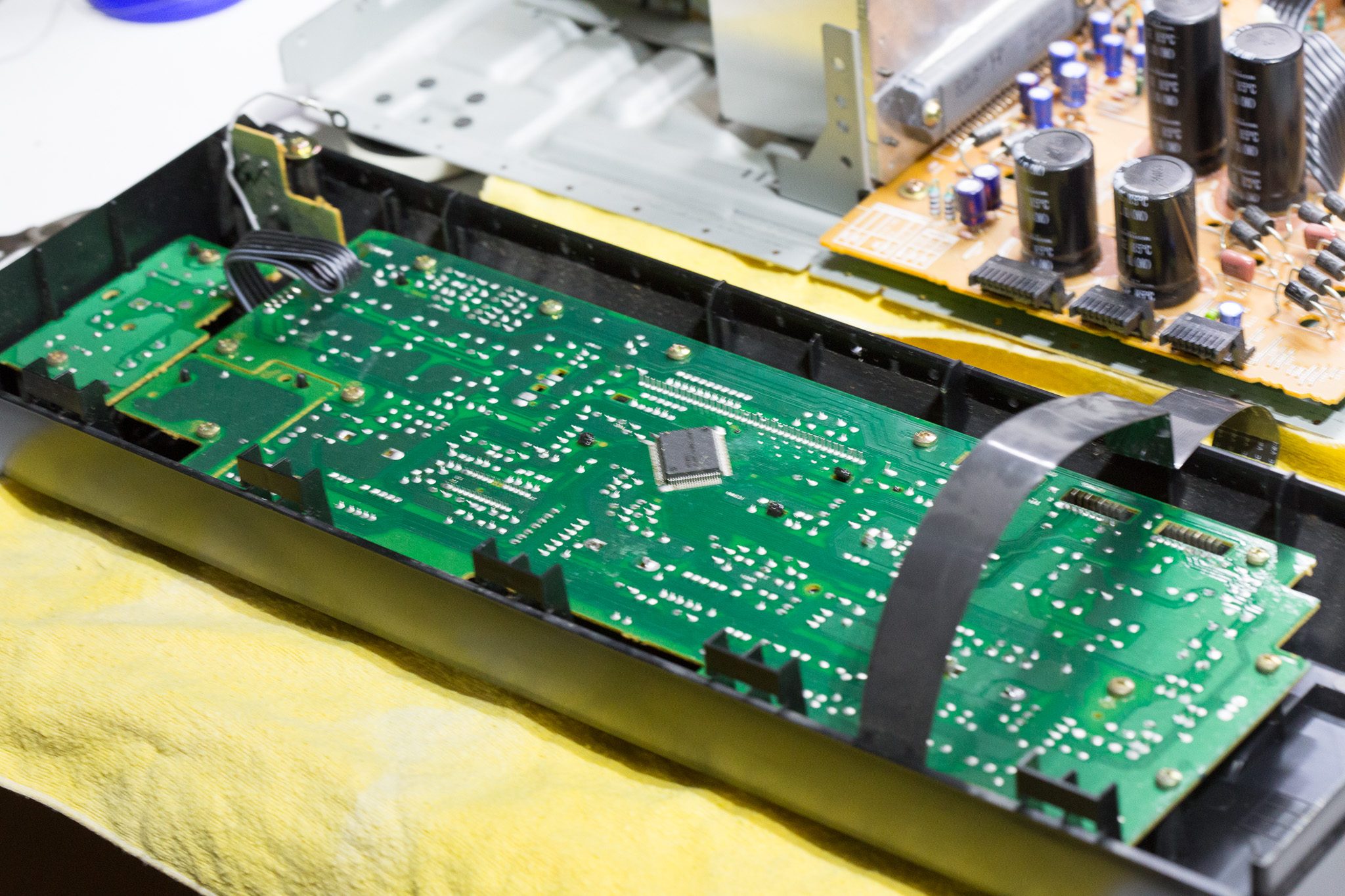 Disassemble the rotary switch and give it a good cleaning: 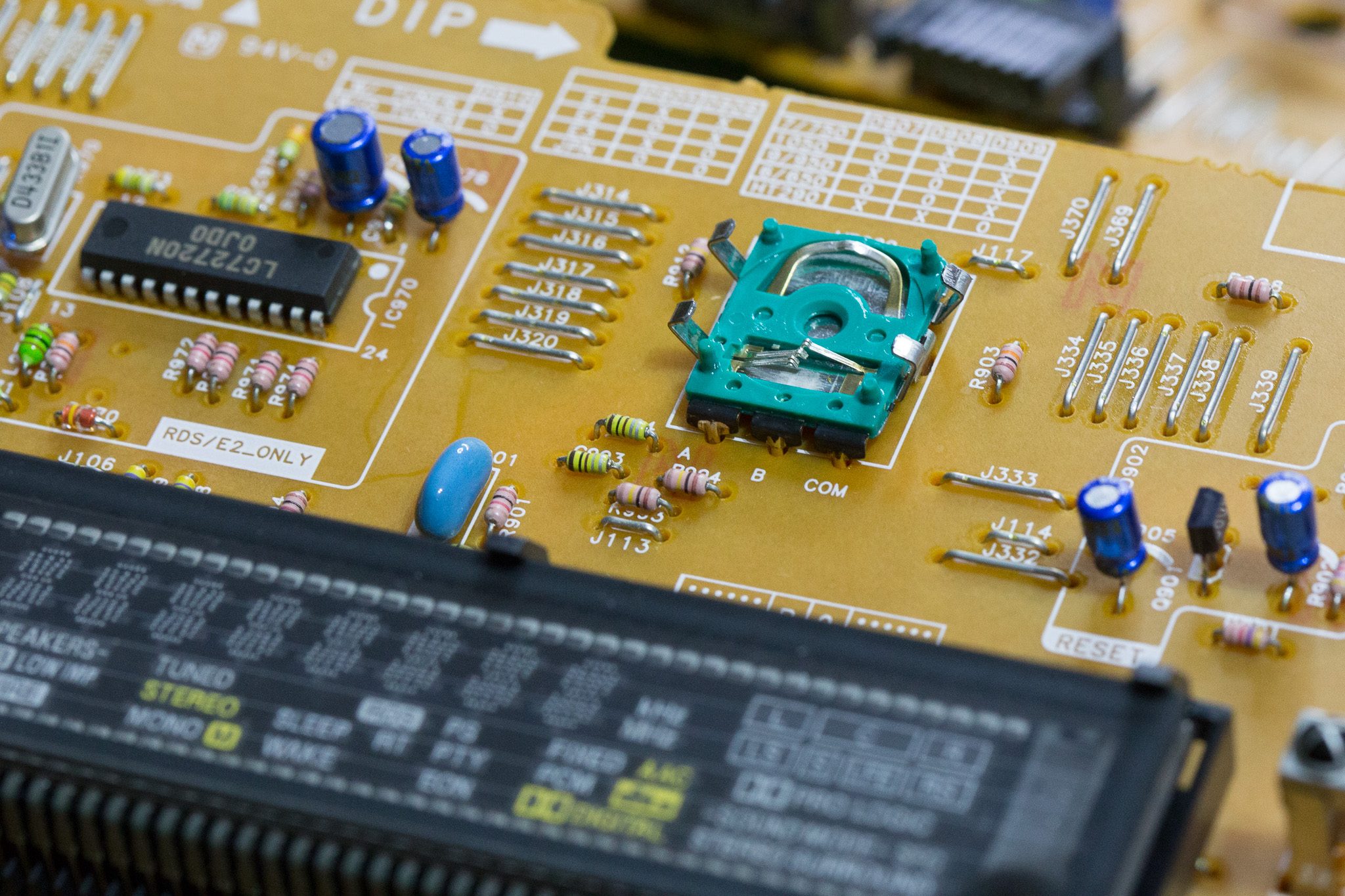 I also remove al lubricant, clean all thoroughly with IPA (Isopropylalcohol) and reapply some new grease on the shaft. Reassemble again and we’re good to go.

There it is again, ready to sell: 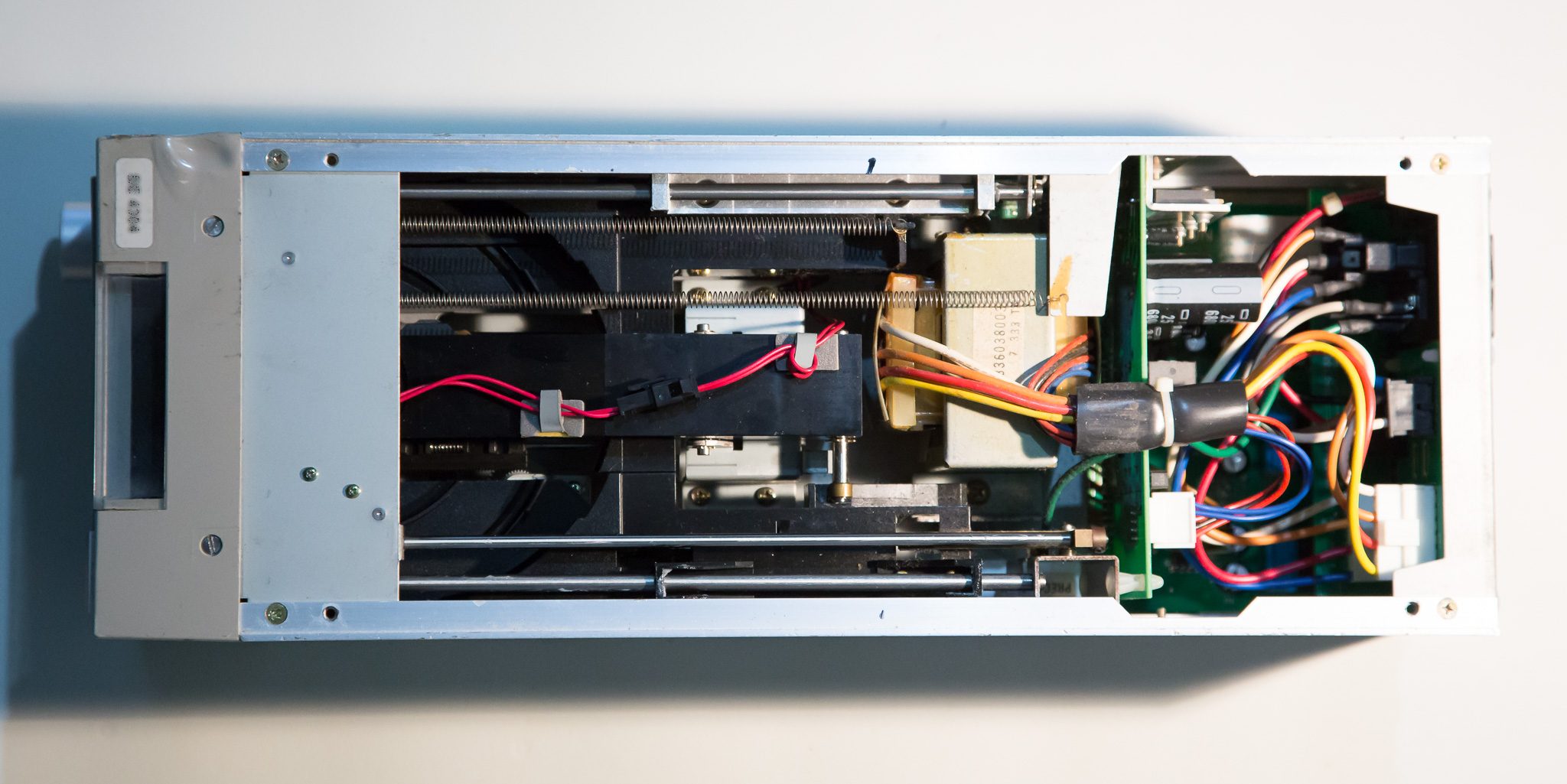 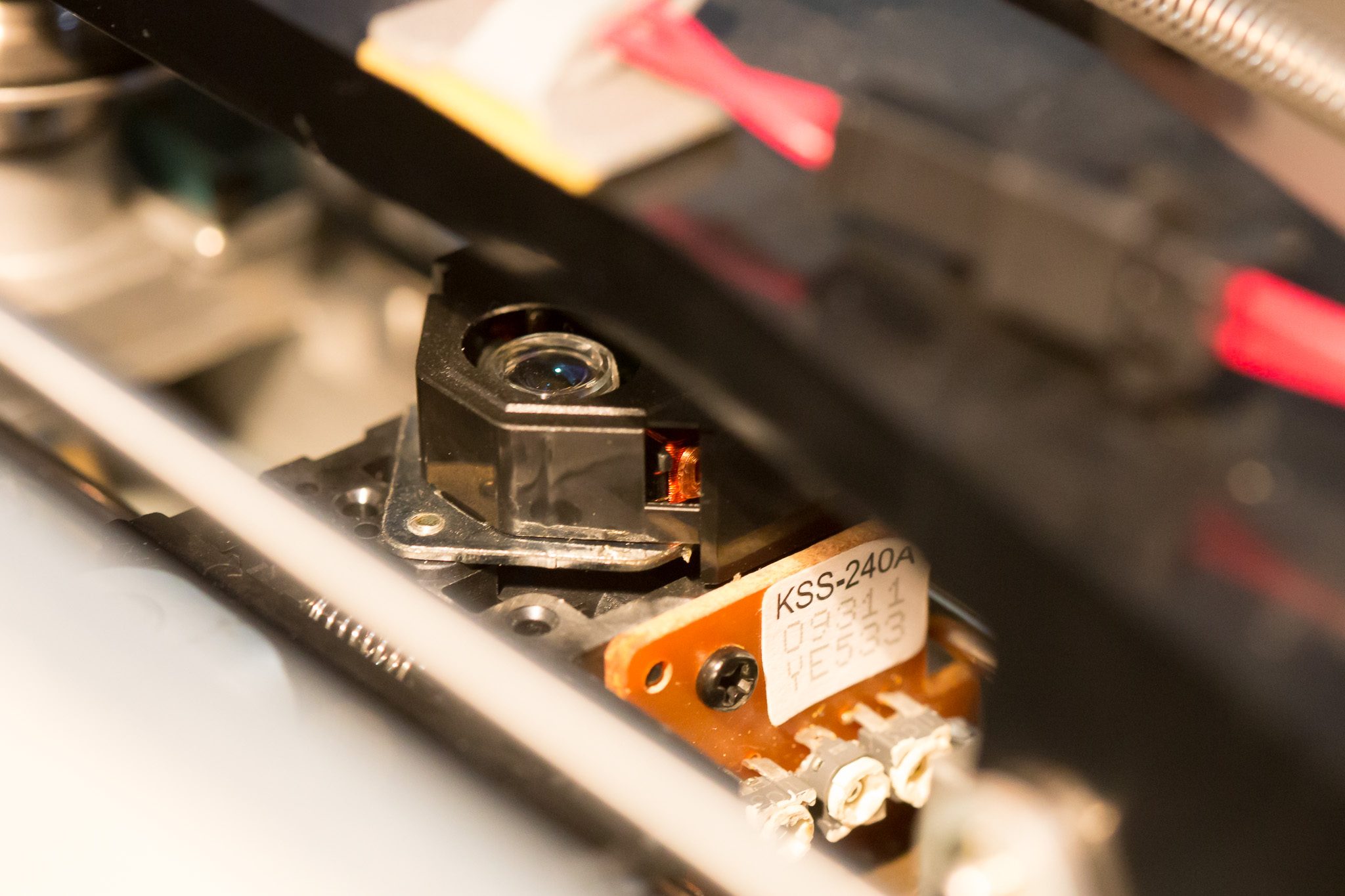 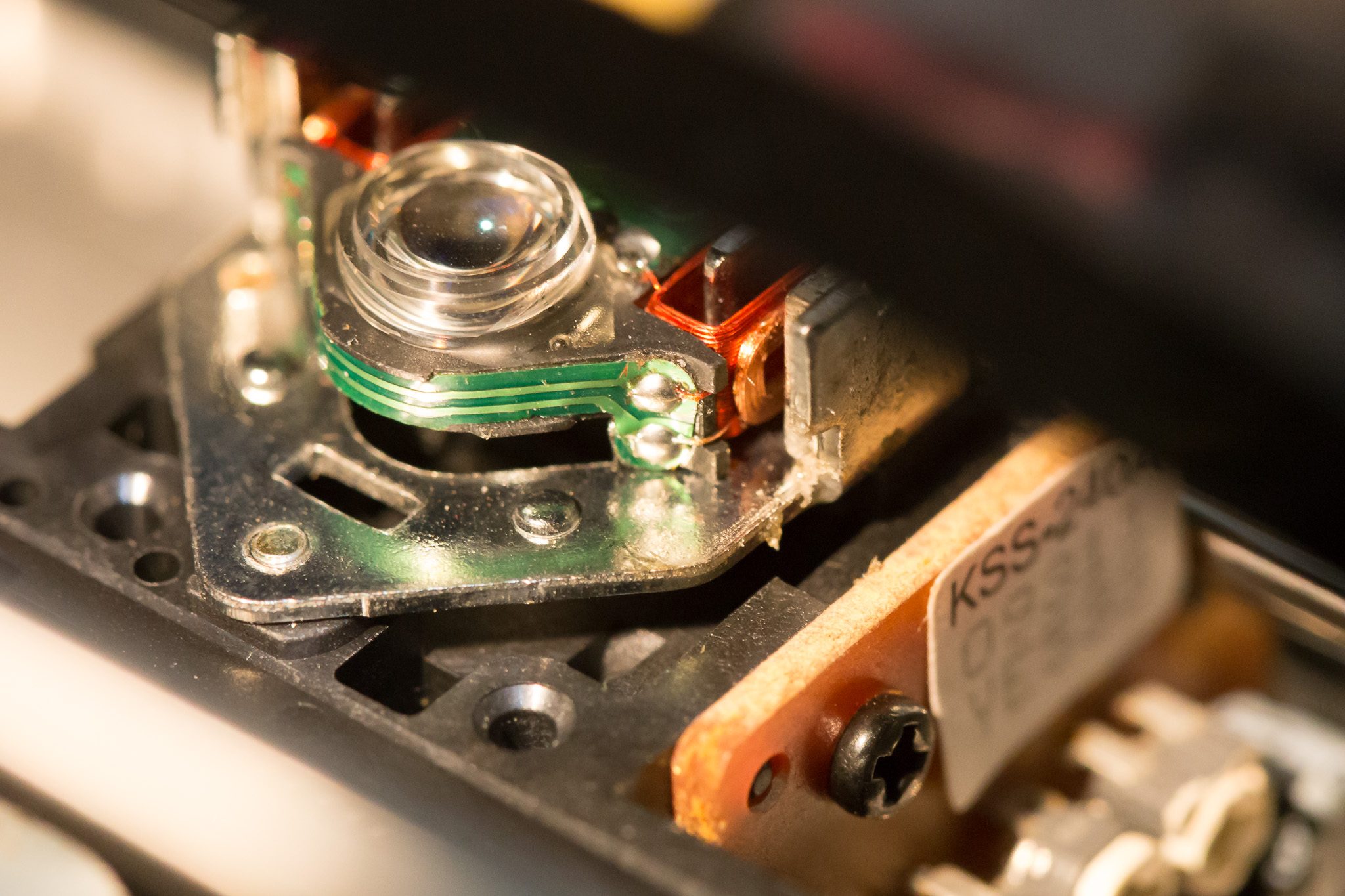 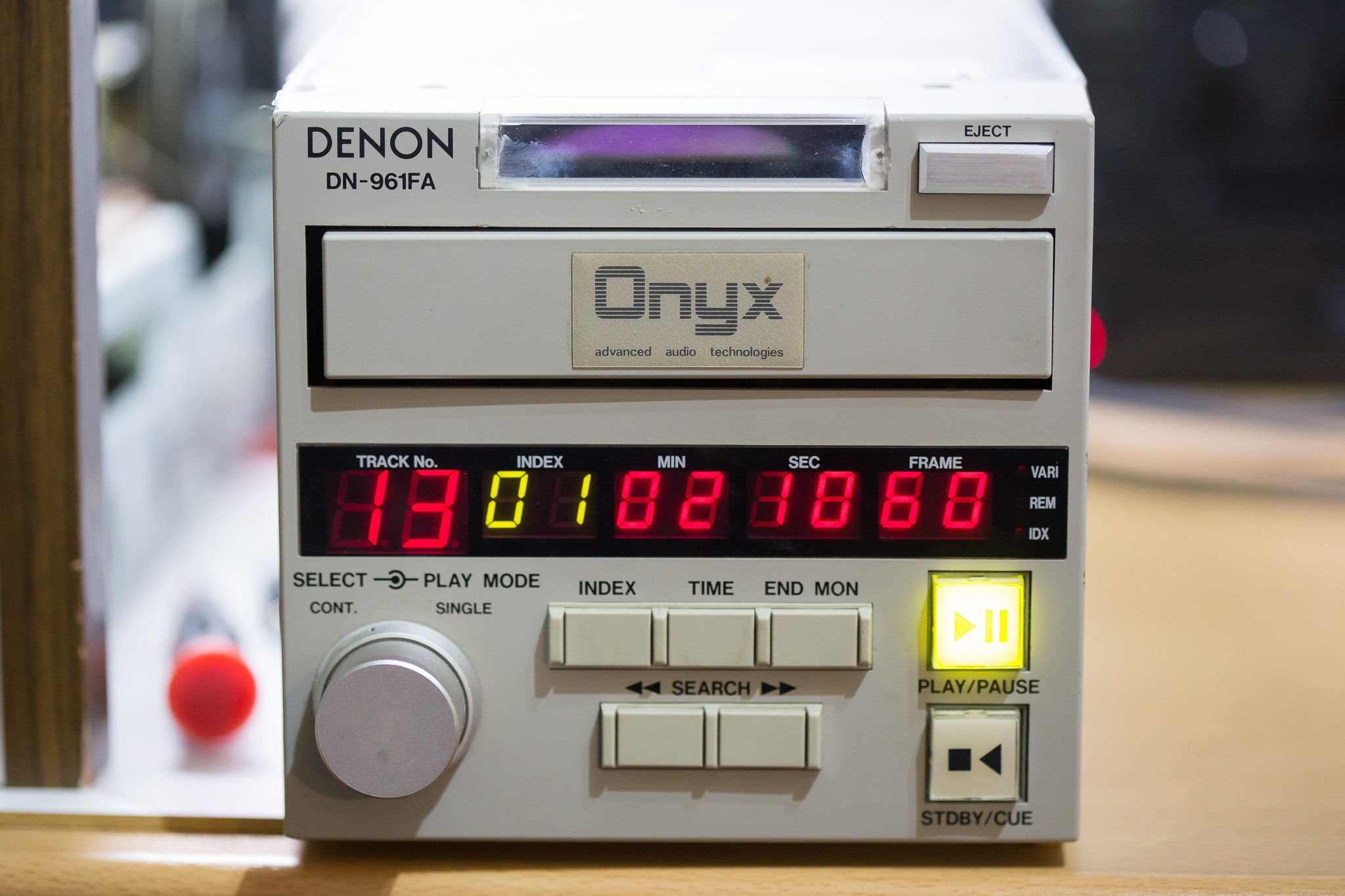 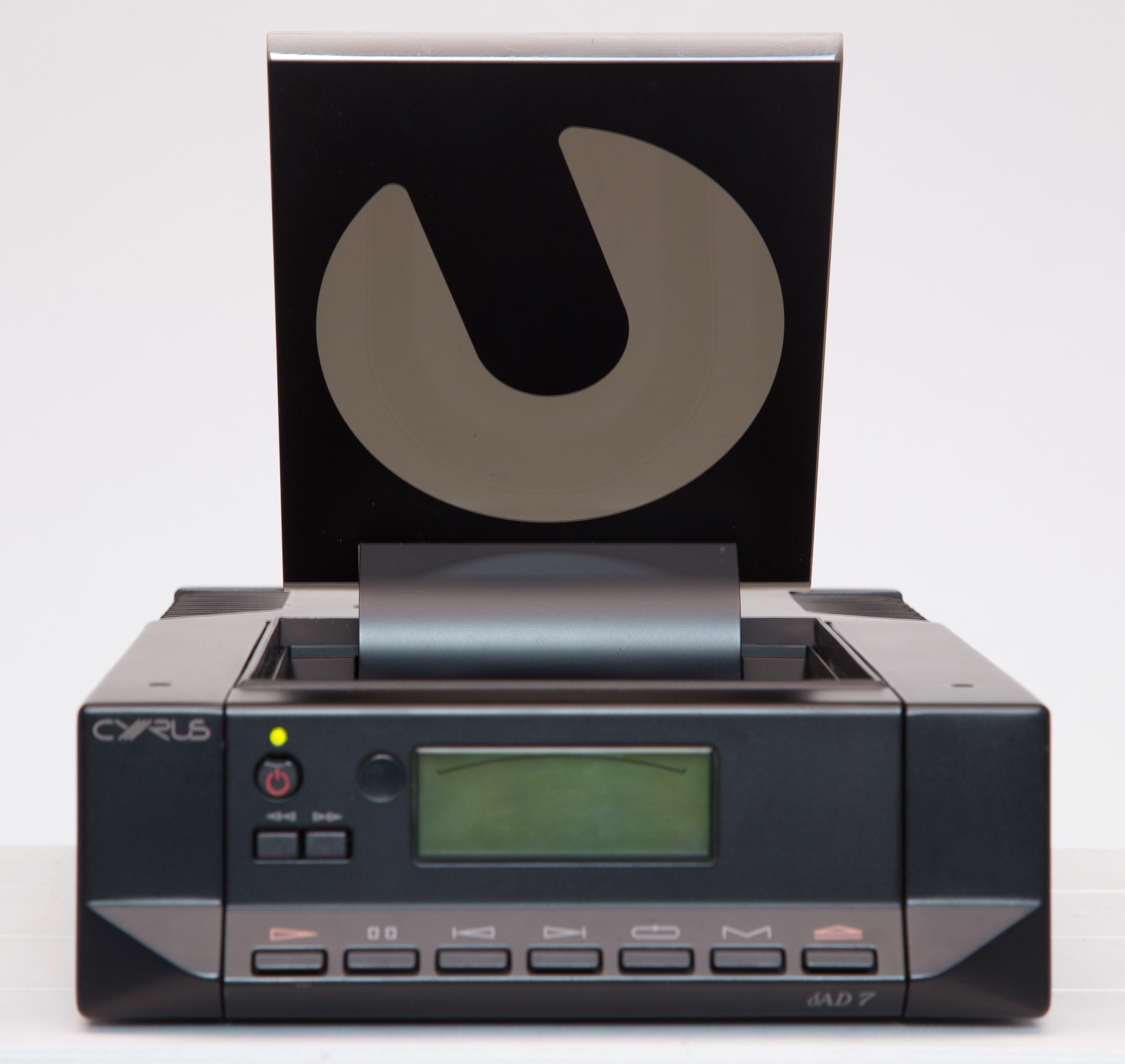 The problem was a broken solenoid for opening the lid of this top loader CD-Player. The bad thing was that the previous owner already had the solenoid removed. So all mechanical parts and even the solenoid were missing.
So this all needed to be redesigned.

I’ve found a solenoid that could work and figured out a mechanism so that the lid will be opened an inch or so. Enough for the user to open up the lid further until it locks onto a magnetic and will stay up. 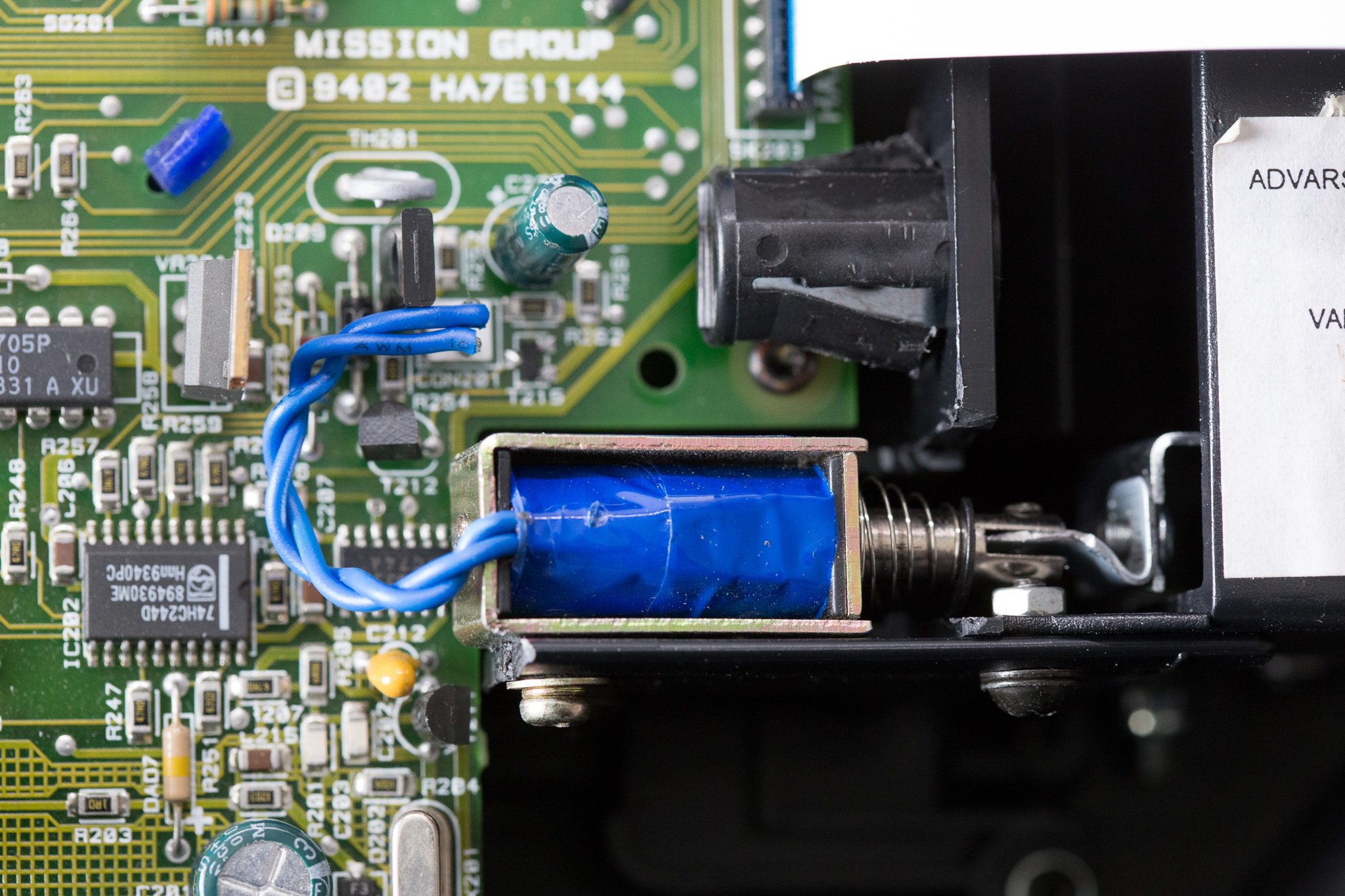 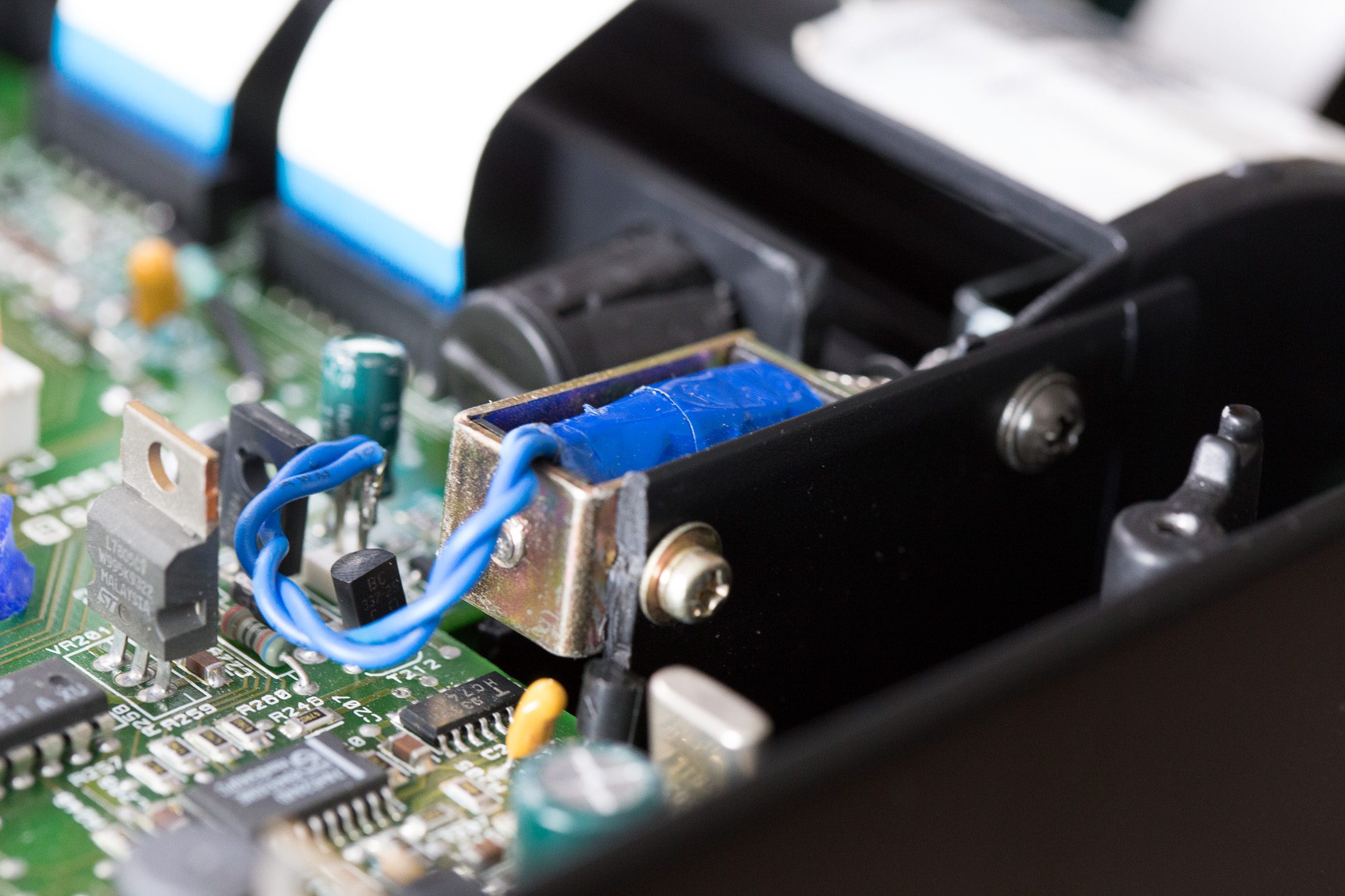 Unfortunately this was not all. The detection of the lid was done by an optical switch sensor, but that din’t work. The circuit could detect if the lid was closed or open.
Since I had no schematics for this cd-player, I had to do some reverse engineering to figure out how this circuitry works. I tested the LED and the light pickup transistor. 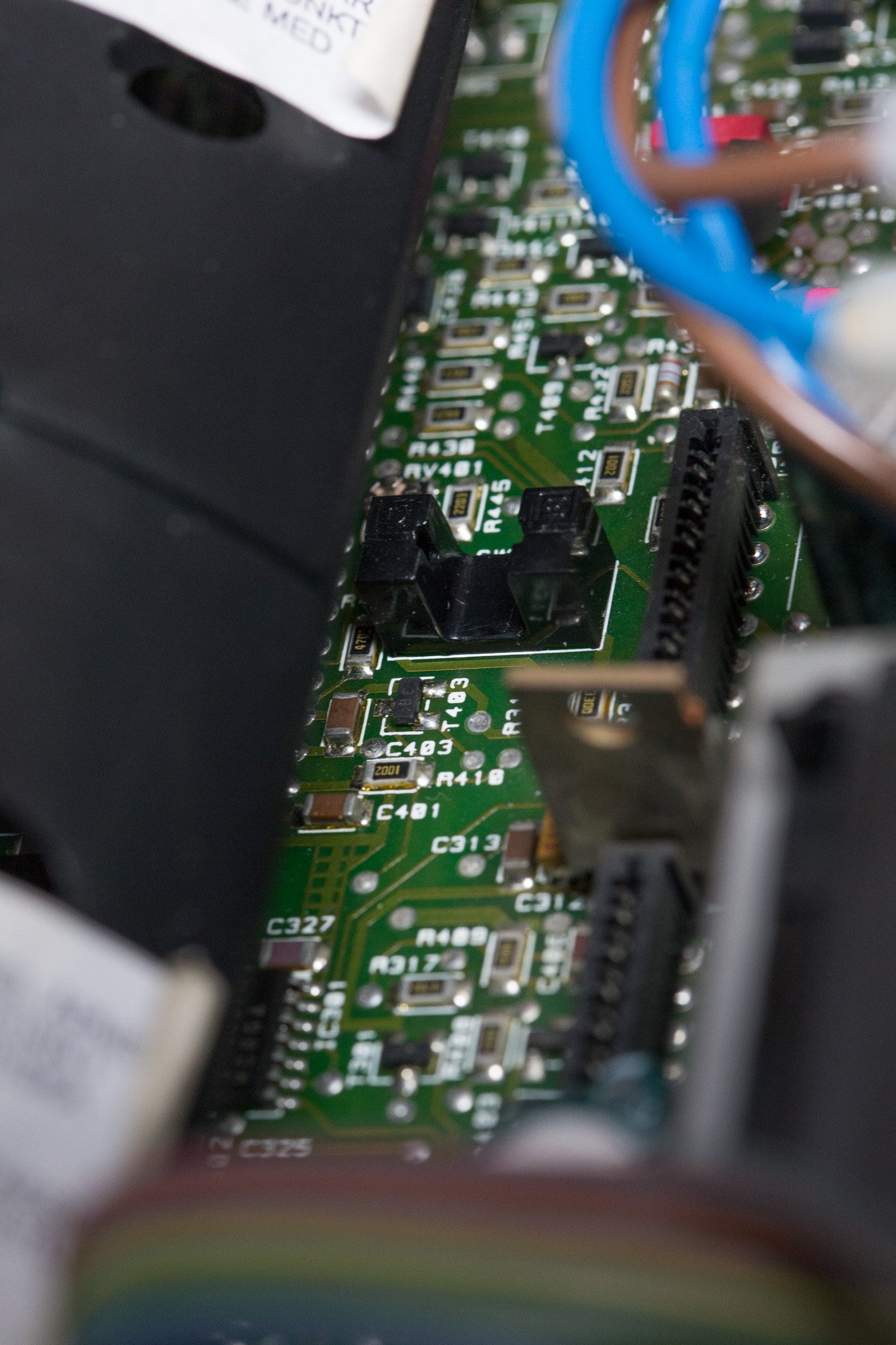 They both did work, but the change in voltage was not enough to have a distinct 1 or 0 binary signal.
By lowering one of the SMD resistors this should work, but soldering
SMD surrounded by a lot of plastic components isn’t ideal. So I came up with the following solution:

A resistor placed in parallel over the SMD transistor. I calculated a value of 2k7 Ohms. Now the light switch correctly gives a digital “0” or “1” depending on the position of the lid.

So there it is, working perfectly fine again. 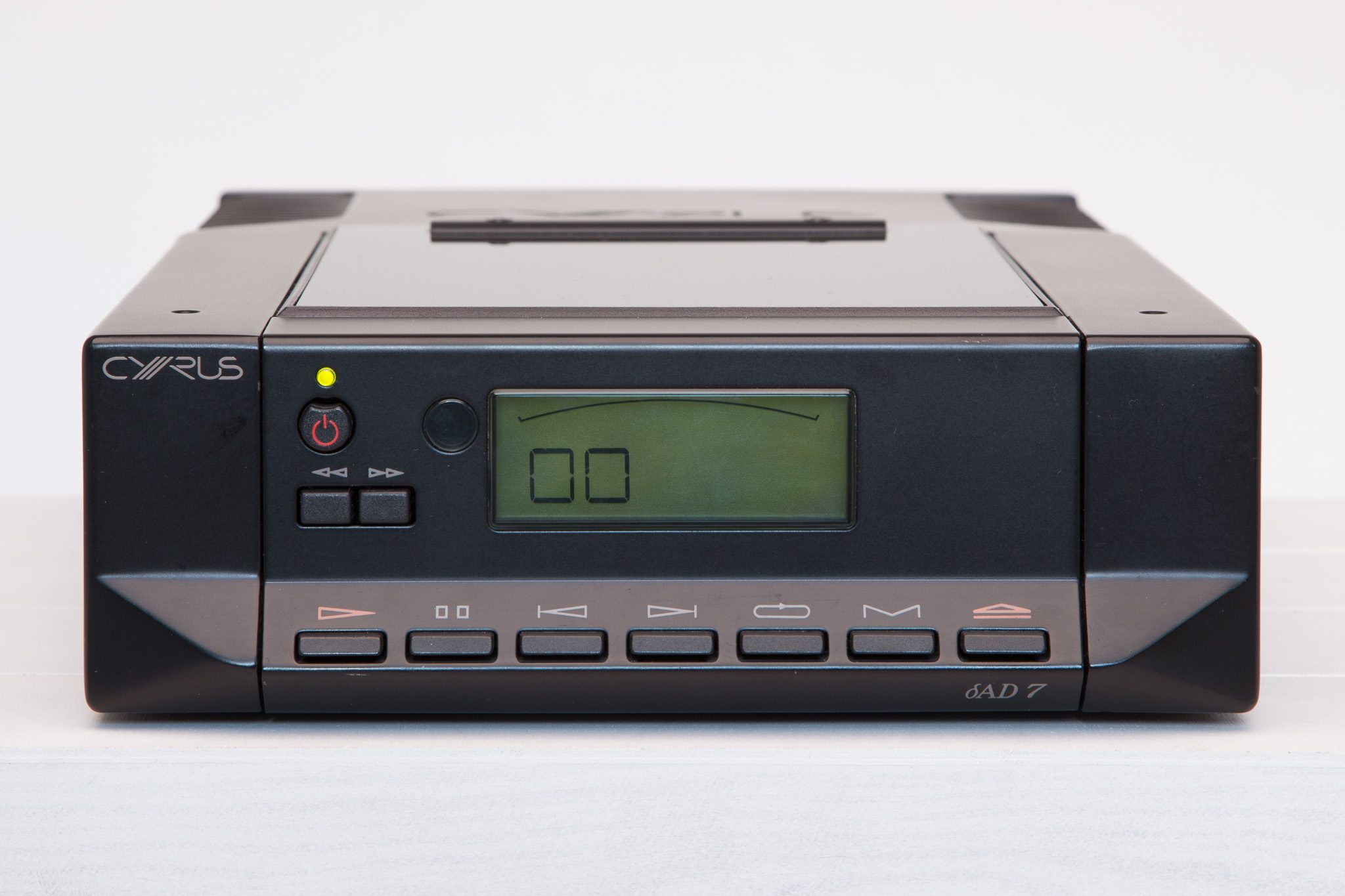