Today on the workbench: A beautiful designed ReVox CD player. Based on one of the first CD players of Philips and uses a CDM1 transport and two mono DACs TDA1540p.

This service friendly machine didn’t come in for a little maintenance, no it was brought in with a common symptom for a TDA1540 like CD player: Distorted sound.
To me this sounded like an easy fix, because I’ve seen this error a lot and it’s commonly cause by a power supply voltage that is to low. In most cases that is the -18 V or -17 V volt line, created by a voltage doubler circuit.

In order to know what we are dealing with, I opened up the device, did a visual inspection, found nothing disturbing and connected it to my test amplifier and have a test run.

Let have a look inside…

It appears there was a bit more going on. The right channel was in complete silence and the left channel experience a heavily distorted audio sound.
So that could be two defects in one. I decided to have a look at the distortion first, the dead channel next.

I’ve measured all the voltage rails and checked it with the service manual / schematics. All are OK and within specifications. So there goes the theory of a bad negative voltage line.
Since there is no digital out, I couldn’t directly rule out half the CD player. Luckily the device was so well build, I could easily take out the DAC board and put the scope on the digital signals.
At first they seem fine, there was a signal on all the required data and clock lines. But a scope isn’t really suitable to view multiple digital signals, even with a 4 channel scope. That’s where this device comes in: 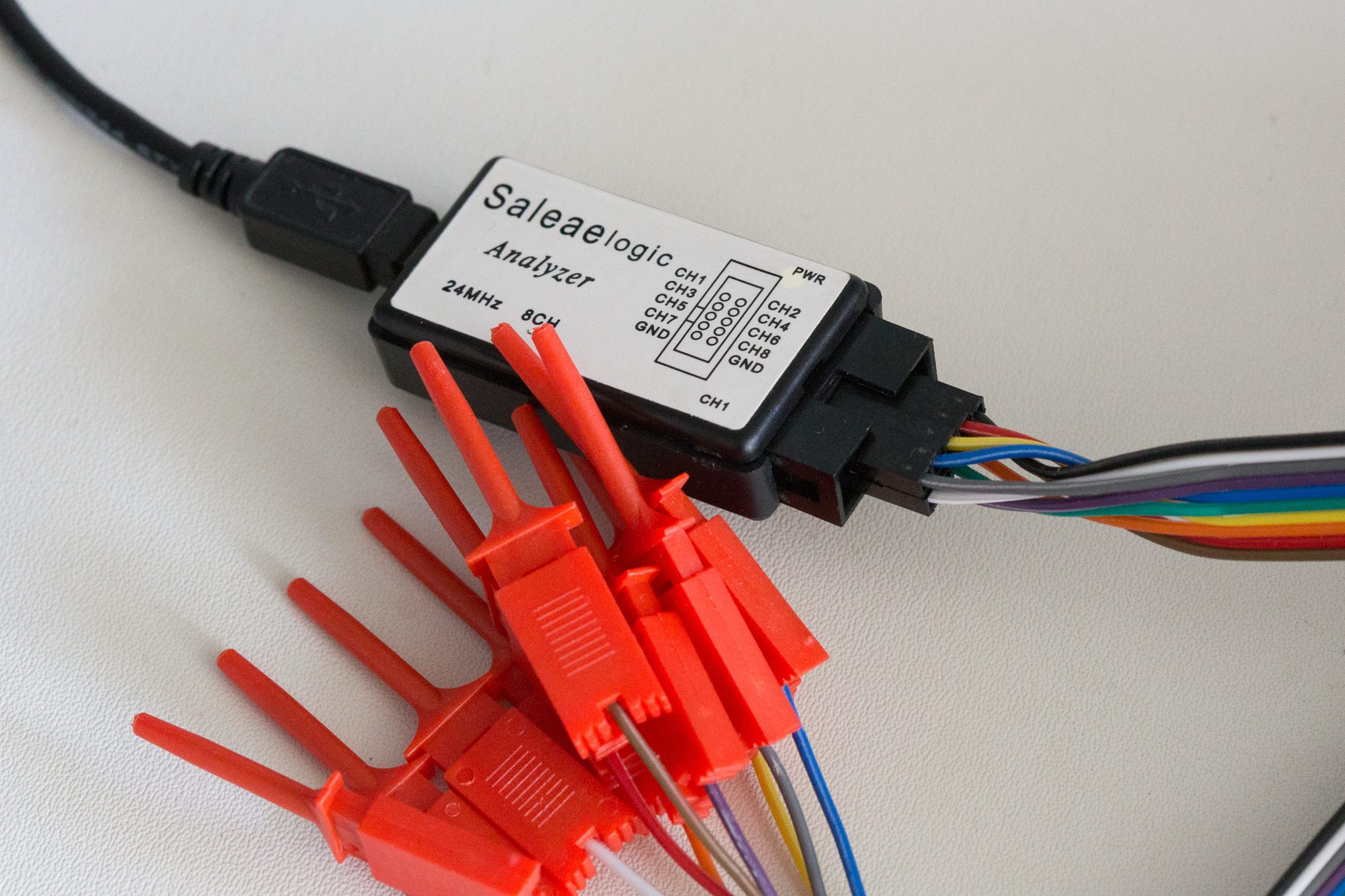 It’s a cheap 8 channel USB logic analyser that can show 8 channels of digital data with a theoretical maximum of 24MHz.

The data signals that are the input of the DAC board is looking fine, all the signals are there and all looks very much like the signals in the service manual. This signal is then fed through the digital filter and 4x oversampling IC SAA7030.
So, lets see how the signals look like after they are processed by that chip.

What is it that this chip does? Well, it does the oversampling, so it will multiply the clock frequency by 4, does the digital filtering and creates new clock and strobe signals.
So basically what is expected to see at the output is that it will have quadrupled the data bitstream for left and right (not exactly, because of quantisation, etc) and created quadrupled clock and strobe signals.

I’ve recorded these signals (except the main clock, because I already ran out of the 8 channels on the logic analyser) with two different sources:

Here you see the 1 kHz calibration signal with a Data clock in, Strobe (which indicates the start/end of a word) and two data channels.
What we would expect at the output is a repetitive data stream, like the output of channel L, but not a constant bitstream like channel R.
But that’s not all, the Data Clock out is not constant and is very slow and not constant.

With the test CD as a source the left and right channel may vary, but that is not uncommon. The outputs are similar as with the calibration signal.

That the right channel does not give any signal makes sense based on what we see here. So the cause of that could be this SAA7030.
The heavy distortion is likely caused by the inconsistent signal on Data Clock out. So it looks like both errors are caused by the same circuit: the SAA7030.

Since the SAA7030 is a very independent chip with not that many surrounding components like capacitors or oscillators, it most likely this chip is defect. Let’s have closer look: 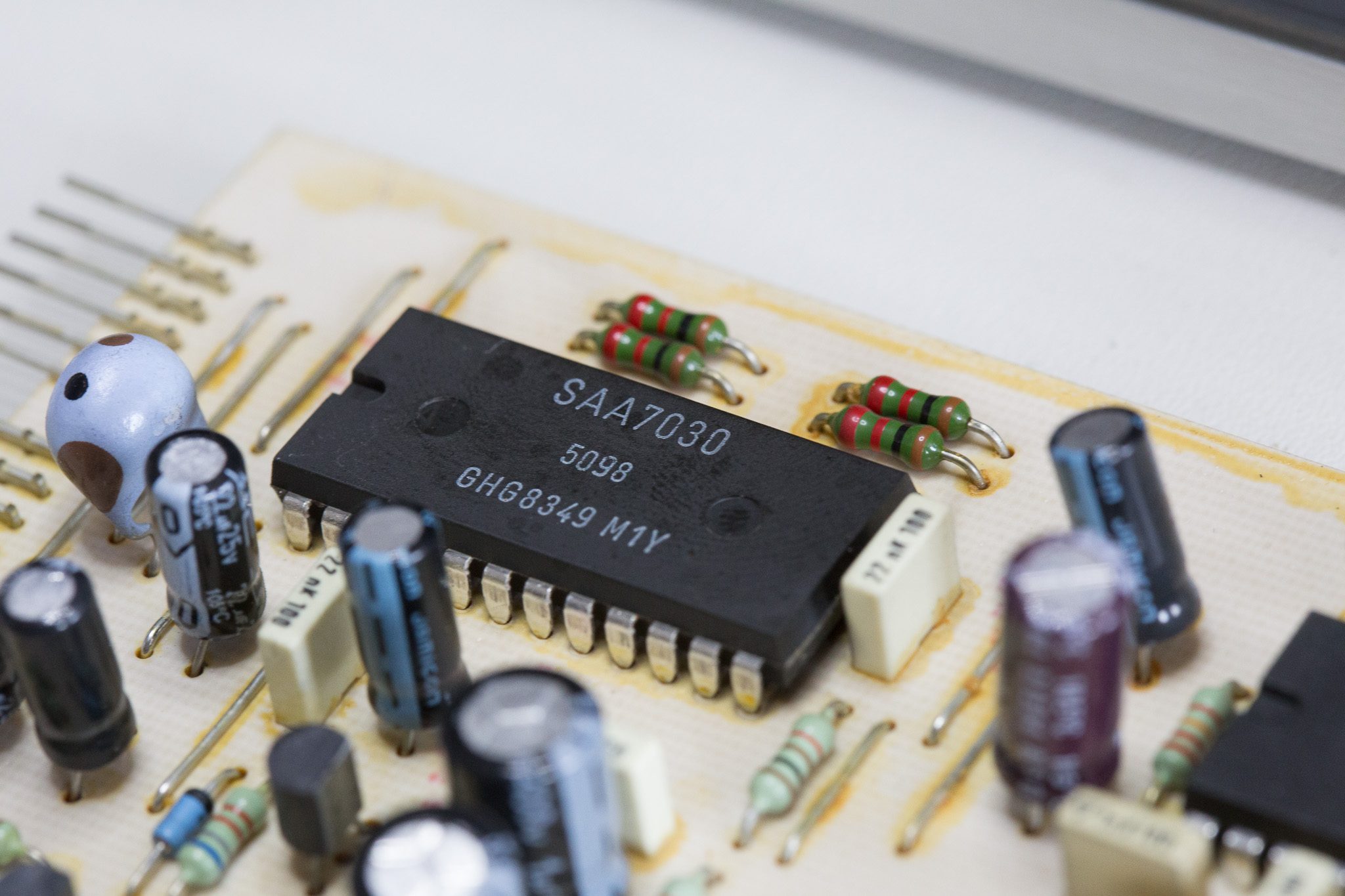 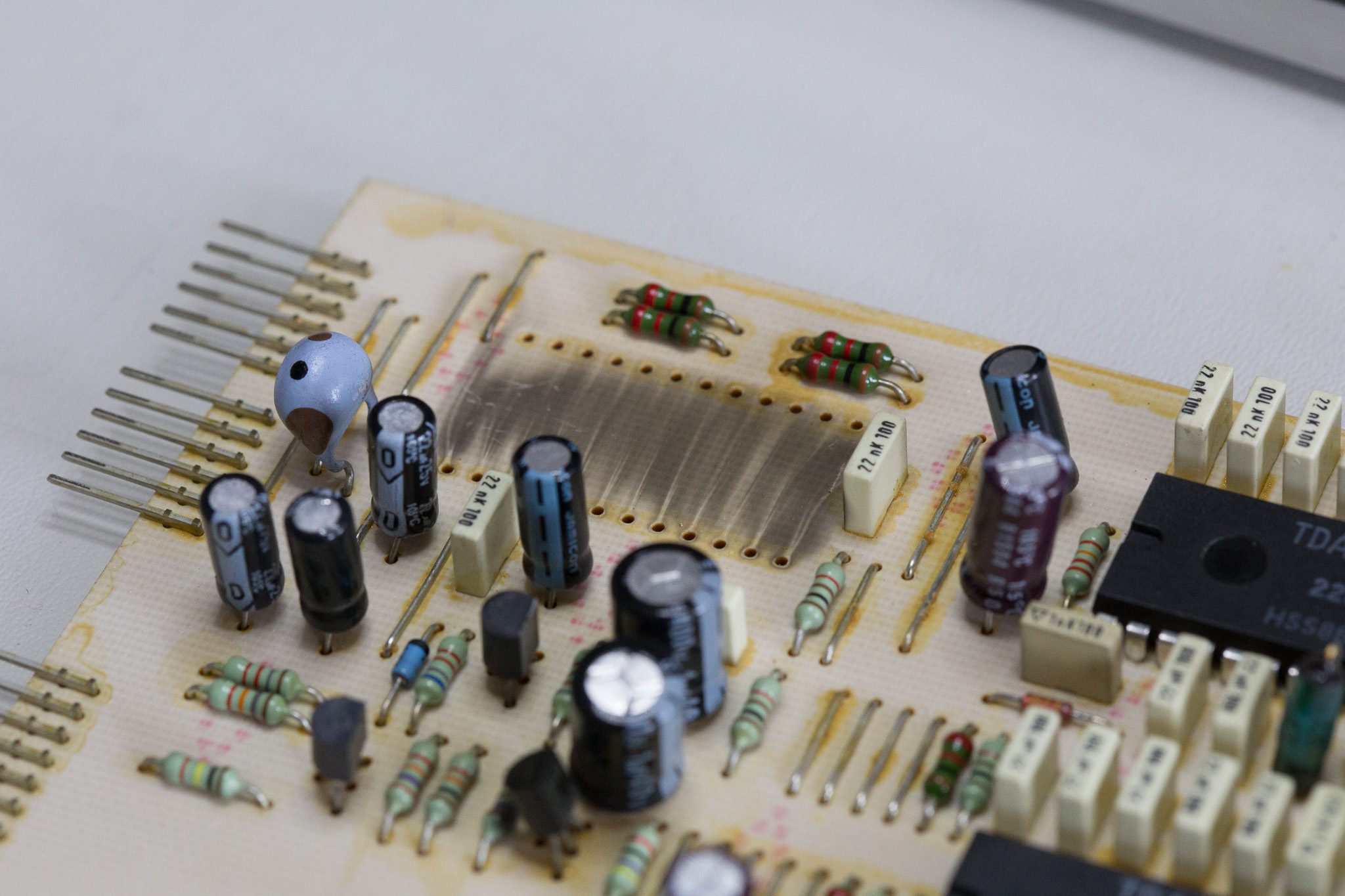 After I soldered the SAA7030 out of the PCB there was definitely signs that it got very warm.

I’ve installed a IC socket and put in another SAA7030 which I salvaged from a CD104 PCB. Installed the DAC PCB and there was sound from both channels again and the distortion was also gone.